Addis Ababa was founded by Emperor Menelik II, who relocated his capital from Ankober to the Entoto Hills in the early 1880s. Following the unusually cold and wet rainy season of 1886, the royal entourage set up temporary camp at the lower-lying Filwoha Hot Springs, largely at the urge of Queen Taitu, who loved its steamy natural baths and christened the site Addis Ababa (New Flower). By the mid-1890s, the new imperial palace at Addis Ababa comprised a 3km² compound enclosing 50 buildings and housing 8,000 people, while the Saturday market near present-day St George’s Cathedral drew up to 50,000 people. In 1900, lack of firewood in the immediate vicinity of Addis Ababa prompted Menelik II to consider relocating his capital to Addis Alem (New World), a plan that was scrapped when it was discovered that the Entoto Hills provided ideal conditions for the fast-growing eucalyptus tree, an import from Australia. The capital’s development was bolstered by the arrival of the Djibouti railway in 1917 and an associated influx of Armenian and French traders, as well as by the drive for modernization, following the coronation of Emperor Haile Selassie in 1930. 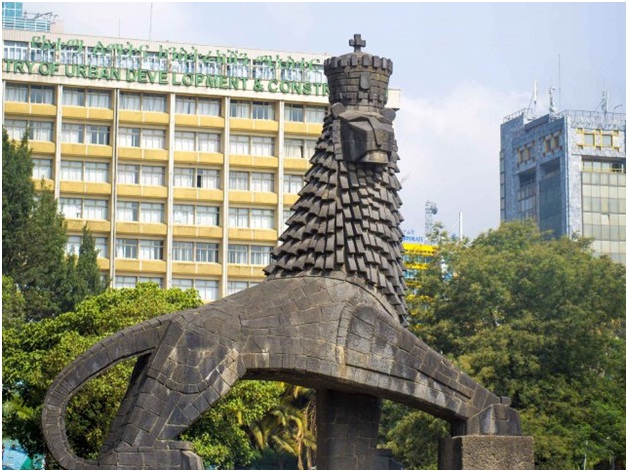 Addis Ababa was chosen as the base for the UN Economic Commission for Africa (UNECA) in 1958, and five years later it was made headquarters of the Organization of African Unity (OAU), now the African Union. The city’s population has grown from around 100,000 at the time of Menelik II’s death in 1913 to almost four million today.
• A medieval Christian presence in the Entoto Hills above Addis Ababa is confirmed by the existence of the ruined rock-hewn churches of Washa Mikael and KidusRaguel. The hills also host the city’s oldest functioning church, Entoto Maryam, a traditionally painted octagon perched on the site where Emperor Menelik II was crowned in 1889. Another relict of Menelik II’s reign, St George’s Cathedral later served as the coronation site of Empress Zewditu and Emperor Haile Selassie. Selassie (Trinity) Cathedral, with its Arabesque facade, is where Emperor Haile Selassie was buried in 2000 at a ceremony attended by Rita Marley. Nearby Beata Maryam, noted for its beautifully painted interior, hosts the subterranean mausoleum of Emperor Menelik II and Empress Zewditu. Other examples of religious architecture include the beautiful early 20th century Anwar Grand Mosque, and the gracious Armenian and Greek Orthodox Churches on the Piazza.
• Addis Ababa is studded with worthwhile museums. The landmark National Museum of Ethiopia is of particular interest for its palaeontological hall, displaying a hominid skeleton stretching back 5.5 million years. Nearby, the IES Ethnographic Museum, set in a former residence of Emperor Haile Selassie (now Addis Ababa University), has a wealth of fascinating displays exploring the cultures of South Omo, as well as the country’s largest collections of traditional musical instruments, costumes and medieval ecclesiastic artworks. Other more subject-specific installations include the Red Terror Martyrs’ Memorial Museum, Addis Ababa Museum, National Postal Museum, Zoological Natural History Museum and the museums associated with St George’s Cathedral, Selassie (Trinity) Cathedral and Entoto Maryam Church.
• Addis Ababa has a thriving cultural life embracing some excellent art galleries, traditional restaurants and live music venues. A feature of the city is its wonderful cultural restaurants, which are typically housed in traditional tukul-style buildings, and serve the full range of meat-based and vegan Ethiopian specialities, accompanied by colourful traditional music and dance performances. Ethio Jazz and contemporary Ethiopian music can also be experienced at a variety of nightclubs.