The temperate and well-watered ‘New Flower’ founded by Emperor Menelik II at the close of the 19th century, Addis Ababa is world’s third-highest capital city, set at the base of the Entoto Hills, and the diplomatic capital of Africa, having served as the headquarters of the Organization of African Unity (now African Union) since its inception in 1963. A cosmopolitan modern city steeped in ancient Ethiopian traditions, it boasts world-class tourist amenities and a lively nightlife, yet it also offering access to some fine museums, atmospheric old churches, and lush montane forests and other green areas.
• Historic churches on the Entoto Hills include rock-hewn Adadi Maryam, which was crafted by the 12th century King Lalibela, and the coronation site of Emperor Menelik II. 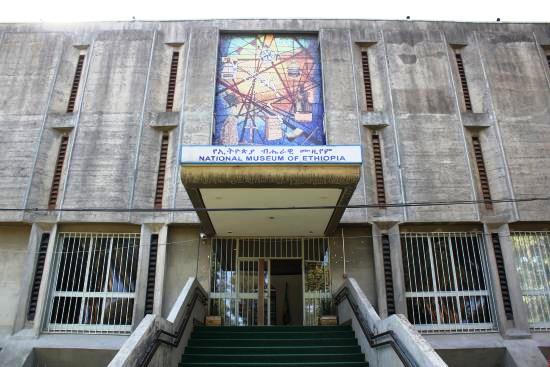 • The National Museum of Ethiopia has a wonderful paleontological hall housing the 3.2 million year old skeleton of ‘Lucy’, along with pre-Aksumite statues from Yeha dating back over 2,500 years.
• The beautiful Anwar Grand Mosque, with its green domed roof and towering minaret, is the city’s largest and oldest Islamic shrine, built in 1922.
• Notable for its unusual Arabic-styled facade, the central Selassie (Trinity) Cathedral is the final resting place of Emperor Haile Selassie. The suffragette Sylvia Pankhurst and former prime minister Meles Zenawi are also buried in its grounds.
• The IES Ethnographic Museum includes displays relating to the cultures of South Omo, a wonderful collection of traditional musical instruments, and Christian icons from the Middle Ages.
• Ethiopia’s tallest skyscraper, the New Africa Union Building, is a 99.9 m high tower block that took over from African Hall as the African Union headquarters in 2012.
• Menagasha National Forest is Africa’s oldest conservation area, protected by imperial decree since the 15th century, and a variety of monkeys and endemic birds can be seen along its network of footpaths.
• The mysterious Tiya UNESCO World Heritage site comprises around three dozen engraved megaliths erected in the 13th century to mark mass graves.
• The resort town of Bishoftu is known for its beautiful crater lake, which are enclosed by lush vegetation, and support a wealth of birds ranging from pelicans and cranes to parrots and canaries.
Other urban attraction include Africa’s largest market, a thrilling live music scene embracing traditional azmari bards and contemporary Ethio-funk, and several traditionally styled 'cultural restaurants' restaurants that celebrate the country’s diverse and unique cuisine.