Ethiopia’s superb network of national parks incorporates a wide variety of habitats, from the high-altitude forests and moors of Bale and Simien Mountains, to the semi-arid country of Awash and marshy savannah of Gambella.

• Bale Mountains National Park is a byword for biodiversity, thanks to its rich mosaic of high-altitude habitats, wealth of endemic wildlife including the charismatic Ethiopian wolf, and ranking as one if Africa’s top five birding hotspots.

• Set below the spectacular crater of Fantelle Volcano, Awash National Park protects a semiarid tract of Rift Valley floor inhabited by dry-country antelope such as the handsome Beisa oryx and magnificent spiral-horned greater kudu, along with almost 500 bird species.

• Still being developed for tourism, the underrated Chebera-Churchura National Park in the western highlands is the most reliable place in Ethiopia to see elephants, which can be tracked on foot through the swampy Maka Forest with the help of experienced scouts.

• Gambella National Park, Ethiopia’s largest, is at its most alluring between March and June, when Africa’s second-largest antelope migration, comprising an estimated 1.2 million white-tailed kob, crosses there from South Sudan.

• The diverse landscapes of Nech Sar National Park include a the twin lakes Chamo and Abaya, and the wide open Nech Sar (‘White Grass’) Plains, home to the Nechisar nightjar, Caprimulgus solala, which many regard to be the world’s rarest bird.

The Simien Mountain massif is a broad plateau, cut off to the north and west by an enormous single crag over 60 kilometers long. To the south, the tableland slopes gently down to 2,200 meters, divided by gorges 1,000 meters deep which can take more than two days to cross. Insufficient geological time has elapsed to smooth the contours of the crags and buttresses of hardened basalt. 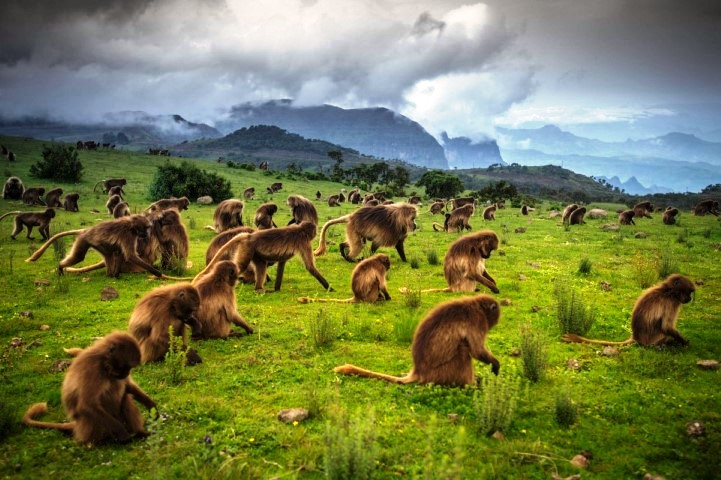 Within this spectacular splendor live the Walia (Abyssinian) ibex, Simien red fox and Gelada baboon - all endemic to Ethiopia - as well as the Hamadryas baboon, klipspringer and bushbuck. Birds such as the lammergeyer, augur buzzard, Verreaux's eagle, kestrel and falcon also soar above this mountain retreat.

Twenty kilometers north-east of Gondar, the Simien Mountains National Park covers 179 square kilometers of highland area at an average elevation of 3,300 meters. Ras Dashen, at 4,620 meters the highest peak in Ethiopia, stands adjacent to the park.

The Simien escarpments, which are often compared to the Grand Canyon in the United States of America, have been adopted by Unesco as a World Heritage Site.

Far to the south-west lies Omo National Park, the largest in the country, with an area of 4,068 square kilometers. It is a vast expanse of true wilderness, adjacent to the Omo River, which flows southwards into Lake Turkana and is one of the richest and least-visited wildlife sanctuaries in eastern Africa. Eland, oryx, Burchell's zebra, Lelwel hartebeest, buffalo, giraffe, elephant, waterbuck, kudu, lion, leopard and cheetah roam within the park's boundaries.

The Omo Valley is virtually free of human habitation but is rich in palaeo-anthro-pological remains. According to scientific research done in 1982 by the University of California at Berkeley, hominid remains from the Omo Valley probably date back more than 4 millionyears. Much of Africa's volcanic activity is concentrated along the immense 5,000-kilometre crack in the earth's surface known as the Rift Valley. It is the result of two roughly parallel faults, between which, in distant geological time, the crust was weakened and the land subsided.

The valley walls - daunting blue-grey ridges of volcanic basalt and granite - rise sheer on either side to towering heights of 4,000 meters. The valley floor, 50 kilometers or more across, encompasses some of the world'slasttrue wildernesses. Ethiopia is often referred to as the 'water tower' of eastern Africa because of the many rivers that pour off its high tableland, and a visit to this part of the Rift Valley, studded with lakes, volcanoes and savannah grassland, offers the visitor a true safari experience.

The Omo River tumbles its 350-kilometre way through a steep inaccessible valley before slowing its pace as it nears the lowlands and then meanders through flat, semi-desert bush, eventually running into Lake Turkana.

Bale Mountain National Park Bale Mountains, with their vast moorlands - the lower reaches covered with St. John's wort- and their extensive heathland, virgin woodlands, pristine mountain streams and alpine climate remain an untouched and beautiful world. Rising to a height of more than 4,000 meters, the range borders Ethiopia's southern highlands, whose highest peak, Mount Tullu Deemtu, stands at 4,377 meters. The establishment The of the 2,400-square-kilometre Bale Mountains National Park was crucial to the survival of the mountain nyala, Menelik's bushbuck and the Simien red fox. This fox is one of the most colorful members of the dog family and more abundant here than anywhere else in Ethiopia. All three endemic animals thrive in this environment, the nyala in particular often being seen in large numbers. The Bale Mountains offer some fine high-altitude horse and foot trekking, and the streams of the park - which become important rivers further downstream - are well-stocked with rainbow and brown trout.

The Baro River area, accessible by land or air through the western Ethiopian town of Gambela, remains a place of adventure and challenge. Traveling across the endless undulating plains of high Sudanese grass, visitors can enjoy a sense of achievement in just finding their way. This is Ethiopia’s true tropical zone and here is found all the elements of the African safari, enhanced by a distinctly Ethiopian flavor. Nile perch weighing 100 kilos can be caught in the waters of the Baro, snatched from the jaws of the huge crocodiles that thrive along the riverbank. The white-eared kob also haunts the Baro, along with other riverbank residents that include the Nile lechwe, buffalo, giraffe, tiang, waterbuck, roan antelope, zebra, bushbuck, Abyssinian reedbuck, warthog, hartebeest, lion, elephant and hippopotamus.

If you are up to unique Ethiopian wildlife, contact Merit Ethiopian Experience Tours to organize a private tour to visit the above national parks and discover more.