Two Days Trip to the walled town of Harar by Flight

Merit Ethiopian Experience Tours [MEET] cultural and historical tour of Harar town for two days and one overnight. This two days private guided trip uses two domestic flights of Ethiopian Airlines from Addis Ababa to Dire Dawa and back to Addis Ababa. Private transportation is organized for the transfer from Dire Dawa to Harar and back, and for the city tour of Harar.

This Two Days Tours is to discover the best of the fortified ancient Islamic city of Harar. Written as 'ሃረር' or 'ሐረር' in Ethiopia's Amharic language, Harar (or "Harer") was the Medieval Muslim Capital of Ethiopia. Harar is located 525 km east of Addis Ababa.

It is famous for its strong walls and architecturally beautiful gates constructed in the 16th Century. Harar gates allow visitors to get to Jugal from five directions. Harar, an ancient religious center of Islam, is also known as holy city of Islam in the Horn of Africa.

Harar was registered by UNESCO as a World Heritage in 2006 for it  is the fourth Holy City of Islam after Mecca, Medina and Jerusalem, for it is where the largest concentration of Mosques in the world is found at (99 mosques, dedicated for the ninety nine names of Allah, in 1 square kilometers area, for its fortified stone walls and five gates built in the 16th Century AD, and as it is a place where different ethnic and the  religious groups lived in harmony for hundreds of years.

During the tour meet locals from Harar - Harari (Adere) at their beautiful traditional houses and at the colorful local Shoa Gate Market.

Visit Arthur Rimbaud's House where the famous French poet Arthur Rimbaud lived in Harar. See the fascinating Indian Architecture of the house. Enjoy displays of photographs taken by Arthur Rimbaud himself and others which show Harar's development and changes.

Other interesting places of visit include: - 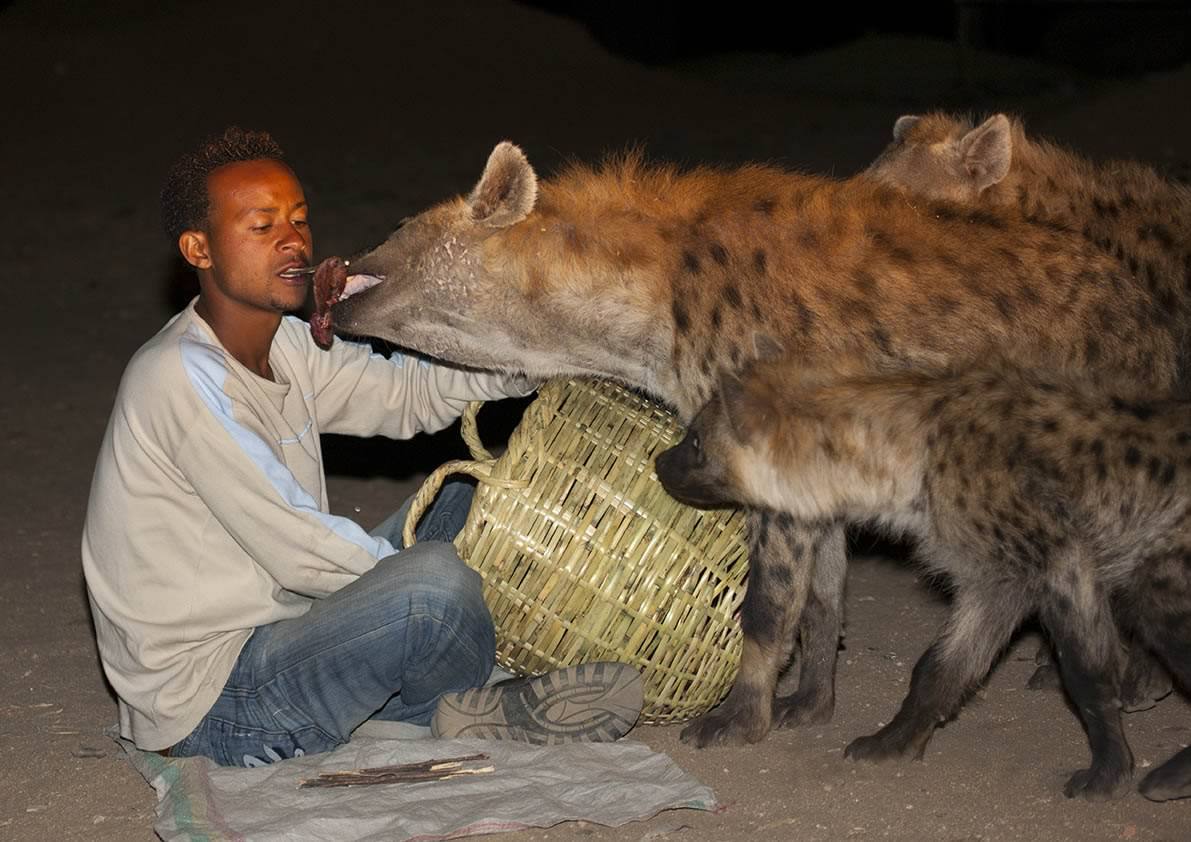 FEEDING WILD HYENAS
Drive to one of the gates of Harar, in the evening, to the Hyena Feeding Site. Gain a unique experience of feeding wild hyenas by hand. See how the "Hyena-Man" feeds hyenas calling by name. Give it a try!

The Tradition of feeding the hyenas began by leaving them some food by the gates of Harar during the drought season so that starved hyenas don't break in to cattle’s' stables and also attack people. 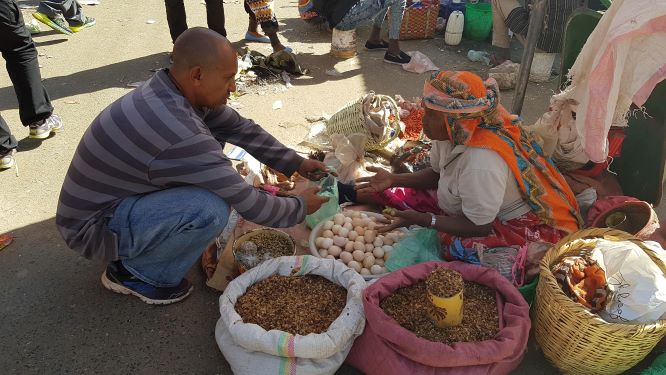 Before lunch visit the walls and gates of Harar which marks and identifies the city’s peculiarity. After having lunch at a local house of the Adere or the Harari people, visit the local market of Harar which is attended by the tribal people of Amhara, Oromo, and Hararis (Adere).

Attend the ceremony of Chewing Chat (mild stimulanomo, and Adere (Harari). Then visit the House of Arthur Rimbaud - a famous French poet, who lived in Harar in the late 19th Century AD. Explore "Jugal" - Harar’s old walled town by walking with a local tour guide.

If interested, check out one of Ethiopia's breweries - Harar Brewery. In the evening, drive to one of the gates of Harar where you can visit the ‘Hyena Man’ as he is feeding wild hyenas by hand and mouth.

Accommodation at Harar on this 2-day trip to Harar is organized at Ras Hotel or at Harari Cultural Guest House - Rewda Guesthouse.

Day 2 - Drive to Dire Dawa and FLY to Addis Ababa

Visit a coffee processing small scale industry. The Coffee from around Harar is one of the best types from Ethiopia. Then, attend a typical traditional Ethiopian coffee ceremony. Explore some of the oldest mosques and shrines of Harar. Finally, drive back to Dire Dawa and visit the colorful spice market and the old Train station which was founded by the French in the 1900s.

Where is Harar city in Ethiopia?

The walled town of Harar is located 525 km (326 miles) east of Addis Ababa, Ethiopia’s Capital City. Harar, the capital of Harari Region, has an elevation of 1,800 meters above sea level. The city of Harar is 50 km away from Dire Dawa town (where the closest airport to Harar is).

How to go to Harar from Addis Ababa?

When was Harar founded?

Is Harar worth visiting? What makes Harar special?

Harar is a fascinating unique town even from Ethiopians perspective. The historic holy city of Harar is quite different from the famous historical and religious sites of Northern Ethiopia.

Few facts to qualify Harar as one of the best places to visit in Ethiopia: -

✺ The town of Harar was the medieval Muslim Capital of Ethiopia

✺ Harar is the 4th holiest city of Islam next to Mecca, Madinah and Jerusalem

✺ Harar is enlisted by UNESCO as a World Heritage Site

How many gates have Harar Jugol?

Historically, the five gates linked Harar with the major trade routes of the time.

What to buy from Harar, Ethiopia? Best souvenirs from Harar?

Harar is also famous for its jewelry made of silver. Frankincense and other resins are some other items visitors may want to buy from Harar.

What to see near Harar with 1-day tour?

You can extend the above 2 days tour of Harar by adding one more day. Best places to visit near Harar in a day excursion are: -

With 7 to 8 hours private day trip from Harar, visit Babile elephant Sanctuary to see the unique elephant species of Loxodonta Africana Orleansi. This African Bush Elephant is endemic to the Horn of Africa.

Koremi Village is the settlement of the Argoba (Argobba) people. The setting of the village together with the stone architecture of the houses makes the village ideal for a day tour from Harar.

The Argobba people and their language are considered endangered.

NOTE - The 2 days tour to visit Harar can be scheduled to three days tour by driving one way to Harar, visiting Awash National Park, and flying back from Dire Dawa.